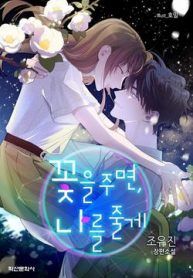 Nagbabasa ka Give Me a Flower, and I’ll Give You All of Me, isang kahanga-hanga manhwa.

Haewon works at the Ulaanbaatar Natural Museum in Mongolia. After suddenly receiving a diagnosis for a terminal brain tumor, she becomes determined to live out one ambitious last dream before she dies – to “discover a flower that has yet to be found in the world.” In pursuit of this dream, she heads off to Gurvansaikhan. But her medical diagnosis ends up being false, and Haewon, completely oblivious, continues her journey until she collapses from the severe flu. When she comes to in an unfamiliar ger (a traditional nomadic house in Mongolia), she’s greeted by a completely handsome stranger, Eunsung! Exhausted by the conflict over who would inherit his father’s company, Eunsung is determined to live his own life, escaping far away to the Mongolian plains with just his dog, Roy. Two people who find each other in the midst of a vast plain… Can both of them fulfill their own dreams in this unfamiliar, barren, foreign land? One woman who came to burn the last embers of her life, and one man who came to live life freely after becoming exhausted of his own… A turbulent romance between two youths, who now stand together at the end of their lives!